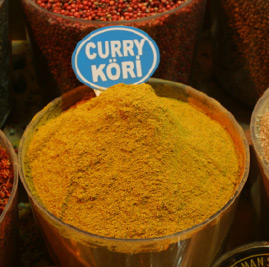 Topping our list of recommended foods is curry.  Curry dishes originated in Southeast Asia, where the incidence and prevalence of Alzheimer’s disease (AD) is particularly low, but are now enjoyed widely throughout the world. Although frequently thought of as a single spice, curry is in fact a mixture of several. Curry typically includes cumin, turmeric, coriander and chili powder, but can also contain a variety of additional spices.

From the perspective of AD prevention, the most notable ingredient in curry is curcumin (see Figure), one of several compounds known as curcuminoids, which have well-established antioxidant and other medicinal properties. Curcumin has been investigated extensively in animal models of AD [1][2], where it has shown to reduce two toxic proteins implicated in the disease: beta-amyloid [3][4][5] and tau [6]. Interest in curcumin’s ability to combat AD is so strong that it is even being tested in clinical trials, both completed [7] and currently ongoing [8].

While the scientific evidence supporting the use of curcumin is especially strong, obtaining an effective daily dose would require a steady diet of curry dishes—a delicious but not entirely realistic prospect! Curcuminoids can also be taken in the form of dietary supplements, however. Notably, Curt Hendrix, a founding member of the AD Foundation’s Scientific Advisory Board, designed a nutritional supplement containing curcumin, together with several other active ingredients, that was found to be effective in preventing Alzheimer’s-type symptoms in two different animal models [5,9].