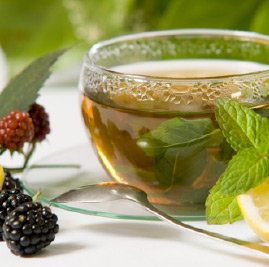 One of the top foods we recommend is actually a drink: green tea. Like another recommended food, curry, green tea is widely enjoyed among Asian cultures, where the incidence and prevalence of Alzheimer’s disease (AD) is especially low. Tea originated in China as a medicinal drink, but has come to be widely enjoyed as a standard staple of the diets of many cultures throughout asia (and beyond). All teas come from the leaves of the tea tree (Camellia sinensis), but what makes green tea green is that particular care is taken to avoid oxidation during processing.

Green tea is rich in a certain kind of chemicals known as polyphenols, a broad class of compounds that are abundant in plants and other plant extracts, to which a wide variety of medicinal properties have been ascribed. Among the many polyphenols in tea, one in particular—epigallocatechin gallate (EGCG)—has been specifically studied for effects that are especially relevant to AD prevention. For example, EGCG has been shown to promote adult neurogenesis [1], the process by which new neurons are formed in the adult brain. EGCG has also been shown to activate the ability of cells to respond to oxidative damage [2], which increases with aging and is widely implicated in AD. EGCG administered to mouse models of AD was found to reduce levels of beta-amyloid, which accumulates abnormally in AD, while also improving the performance of the animals in memory tasks and other performance measures [3,4]. Finally, in a randomized controlled clinical trial conducted on Down Syndrome patients—who invariantly develop Alzheimer-type pathology by the fourth decade of life—EGCG supplementation resulted in significant improvements in multiple cognitive tests, together with evidence of improved nerve cell connectivity [5].

We note that ECGC is also one ingredient in a medical food cocktail recommended by the AD Foundation, which has been shown to prevent AD-like symptoms in two animal models of the disease [6,7]. The exact formula in this medical food cocktail, including ECGC and other ingredients, is available for purchase as a product called A.L.Z. Defense™ made by NooMeds, LLC.  A.L.Z. Defense™ can be purchased at NooMeds.com and every purchase helps support the AD Foundation and their mission to Prevent Alzheimer’s NOW!™

There is another benefit of enjoying a cup of green tea—albeit one that is less quantifiable: taking a break in your day to sit down and sip a warm drink, perhaps in the company of a good friend, is one of the small pleasures in life. We know that anything that reduces stress is good for the brain, so relax and enjoy a cup of green tea!