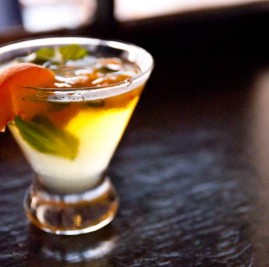 One of the best ways to prevent Alzheimer’s disease (AD) is with a cocktail. A specific cocktail, in fact.

Hang on! Don’t rush off to the liquor cabinet thinking you’re going to drink your way to AD prevention! The word “cocktail” is really just a generic term for a mixture of many different things (think “fruit cocktail”). In this case, we are talking about a very special kind of cocktail—a medical food cocktail—that has been shown to prevent Alzheimer’s-type symptoms in animal models of the disease.

The specific medical food cocktail we will be discussing was developed by Curt Hendrix, a founding member of the AD Foundation’s Scientific Advisory Board. Curt is a chemist and a nutritionist, and the specific recipe he developed was the culmination of many decades of research and development. The cocktail contains many ingredients, including curcumin, an ingredient from green tea, and several vitamins and antioxidants. The evidence behind many of these ingredients is discussed elsewhere on our website, but here we focus exclusively on the research showing that this cocktail is effective.

Curt obtained a grant from the National Institutes of Health to study this formula. Two separate studies were conducted, one in a mouse model of AD, and another in a breed of dogs—beagles—that is known to develop Alzheimer-type pathology.

The study in mice [1], which was conducted at UC Irvine, yielded very impressive results. Daily treatment with the medical food cocktail reduced the accumulation of beta-amyloid, a protein that is well-established to be the trigger that initiates the disease, and which also makes up the “plaques” that litter the brains of Alzheimer’s patients. The cocktail also improved the performance of the animals in two memory tests—the Morris water maze (see Mental Exercise of the Month) and a task called “novel object recognition.” These very significant results show that we can indeed prevent AD—even with very simple supplements, provided we start early enough.

The study in beagles was conducted at the University of Kentucky [2]. Because dogs live much longer than mice, and because the study was only funded for a few years, the cocktail was administered significantly later in the course of the disease. In this case, no effect was observed on beta-amyloid levels. However, the dogs fed the medical food cocktail exhibited significant improvements in cognitive function. Although taking action later in the course of the disease is less effective than starting earlier, this specific cocktail was capable of improving mental function nonetheless, suggesting it may be effective in patients who already have the disease.

In an exciting development, a company called NooMeds is now selling this exact formulation as a new product called A.L.Z. Defense™.  Even more exciting, your purchase helps support the AD Foundation and their mission to Prevent Alzheimer’s NOW!™ Now you can do something about your memory and help fund cutting-edge scientific research on AD prevention.