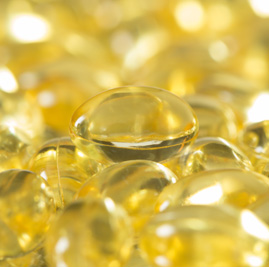 Can fat be good for the brain? Well, fat comes in many shapes and many types, and there is emerging evidence that several specific kinds of fat are indeed beneficial to brain health and mental functioning.

Generally speaking, fat—or more correctly fats—consist of different numbers of carbon atoms linked together in a long chain. These carbon chains are “hydrophobic,” meaning they repel water, and this is what makes fats “oily.”  Fats are not only involved in energy storage (e.g., as in belly fat), but are also involved in a wide variety of other physiological processes.

As you’ve no doubt heard, fats can be “saturated” or “unsaturated.” In saturated fats, all the carbon atoms are linked by so-called “single-bonds,” whereas in mono- and polyunsaturated one or more adjacent carbon atoms are connected by so-called “double-bonds.”  The details aren’t important, but the double bonds make the fats less flexible, and differences in the number of these bonds affect things like the melting temperature of different fats (think of how oil, but not butter, is liquid at room temperature).

Fatty acids are a type of fat that contain an acidic chemical group (carboxylic acid) at one end. The acidic group is “hydrophilic,” meaning it attracts water. By having one part that attracts water and another that repels it, when placed in water these molecules like to arrange themselves into sheets with their hydrophobic portions facing each other and the hydrophilic portions facing the water on either side of the sheet. These so-called “lipid bilayers” are exactly what make up the membranes that surround every cell in your body, and accordingly, fatty acids are often found inside cell membranes.

With this as background, we can now appreciate what omega-3 fatty acids look like. They are composed of a long chain of carbons, with a few double bonds, and a carboxylic acid at the end. “Omega 3” simply refers to the fact that the first double bond occurs 3 atoms from the end. Here is the chemical structure of one very important omega-3 fatty acid, docosahexaenoic acid (DHA):

DHA—the most abundant omega 3 fatty acid in the brain—is a very important part of a balanced diet. Fish are a rich source of DHA and other omega fatty acids, and they can also be found in fish oil. As it turns out, the amounts of these important fatty acids have steadily decreased over the history of mankind, largely because our modern, western diet contains much less fish than that of our ancestors.

Low levels of omega 3 fatty acids may be a cause for concern. For example, levels of DHA—the most abundant omega 3 fatty acid in the brain—have been shown to be reduced in Alzheimer’s disease (AD) [1], and lower levels were associated with reduced cognitive performance even in middle aged, otherwise normal individuals [2].

Conversely, a growing body of basic research and clinical evidence suggests that supplementation with DHA can improve mental functioning and even combat AD. Several studies in animal models of AD—including one conducted at UC Irvine [3]—have shown that DHA lowers the accumulation of beta-amyloid and hyperphosphorylated tau—the two principal hallmarks of the disease. Several other studies have seen similar results, in addition to beneficial reductions in neuronal loss and cognitive deficits [4].

Of note, DHA supplementation has been tested in clinical trials. In 2007, the Alzheimer’s Disease Cooperative Study conducted a double-blind, randomized, placebo-controlled clinical trial comparing DHA and placebo over 18 months in 402 people (average age=76) diagnosed with mild to moderate AD.  In this study, treatment with DHA did not slow the rate of change on tests of mental function, global dementia severity status, activities of daily living, or behavioral symptoms in the study population as a whole. a relatively large clinical trial specifically focused on AD patients [5].  By contrast, a 2010 clinical trial on 485 subjects aged 55 and older found that DHA taken for six months improved memory and learning in healthy, older adults with mild memory complaints [6].

These findings contain an important lesson: as has been true for all clinical trials on experimental therapeutics, intervening with DHA after the appearance of Alzheimer’s disease symptoms proved ineffective. By contrast, intervening earlier in individuals showing only minor memory impairment showed significant benefit. These results provide even more support for the central mission of the AD Foundation—to Prevent Alzheimer’s NOW!™

While we recommend consulting with your doctor first—and taking care to avoid sources of omega-3 fatty acids that might contain mercury—there appears to be good evidence recommending the use of DHA, EPA and other omega-3 fatty acids as a safe and natural means to maintain a healthy brain and healthy memory.