Warm greetings from the Auguste Deter Foundation! We are a non-profit, charitable foundation formed in honor of the first patient diagnosed with Alzheimer’s disease — Auguste Deter. As president, I am honored and deeply humbled to have helped launch this amazing new enterprise. I’d like to take a few moments to describe our organization, its mission, and the history and rationale behind it, from my own personal perspective. 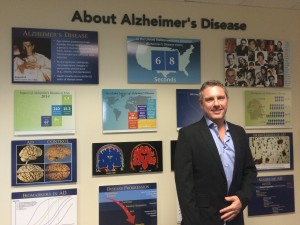 I am a research scientist. I have studied the neurobiology of memory formation for more than 25 years and Alzheimer’s disease (AD) in particular for more than 20. I have had the great privilege of training under and working with several of the world’s leading Alzheimer’s research scientists. My personal mission in life has long been to develop an effective treatment for the disease.

This quest—to develop an FDA-approved drug to treat Alzheimer’s—is a goal shared by numerous highly talented individuals and organizations, and millions of man hours and many billions of dollars have been spent pursuing it.

So what do we have to show for this herculean effort? Regrettably, in the final analysis, nothing! Sophisticated new drugs have been developed, and there have been more than 100 clinical trials, but—sadly—all have failed.

We have, however, learned a powerful lesson: we know now, more clearly than ever, that to effectively combat this disease, we must take action as early as possible. If we wait for symptoms to emerge, we have waited too long.

The good news is we can prevent Alzheimer’s. In animal models, scientists have prevented the disease literally hundreds of different ways. I have personally done so myself (see Figure). And—even better—Alzheimer’s can be prevented not just by risky experimental drugs, but also by life-style changes, including exercise and a healthy diet, as well as by nutritional supplements.

Dr. Leissring has completely prevented Alzheimer’s-type pathology in mice, in this case using an enzyme that destroys the Aß protein, which forms the plaques that litter the brain of Alzheimer’s patients (brown staining, left panel) From Leissring et al., Neuron, 2003.

The mission of the AD Foundation is to utilize this large body of basic research to do anything and everything we can to prevent Alzheimer’s right now. Through regular updates to our website, our goal is to provide cutting-edge information about the latest breakthroughs in basic scientific research—in language that the average person can understand. All of our recommendations are intended to be perfectly safe, though we do advise consulting with a physician before implementing any of them. All have been endorsed by our Scientific Advisory Board, which is composed of a growing list of prestigious doctors, scientists, nutritionists and other health experts.

An inevitable question is, have our lifestyle and dietary recommendations been shown to prevent Alzheimer’s in humans? No, they have not. Why? Because to do so would require waiting years—potentially decades—to be validated. Prevention trials of this scale would also be prohibitively expensive (costing many, many billions)—far more than any pharmaceutical company or government is willing to spend. The reality is truly rigorous prevention trials will in all likelihood never be conducted.

Hopefully, this helps explain the rationale behind our motto — Prevent Alzheimer’s Now!™ We refuse to wait to take action. There are—right here and right now—many scientifically validated steps we can take to prevent this horrifying disease.

We also have another, very important mission: raising money for continuing basic research into the prevention of Alzheimer’s disease. Proceeds from our forthcoming nutritional supplement will help fund research, and we also accept direct donations.

Thank you for taking the time to learn more about the purpose and vision of the AD Foundation. There are many ways you can help our cause: like us on Facebook; introduce us to a friend; consider making a tax-deductible donation. You can also join us by taking on leadership of a project of your choosing. Together we really can Prevent Alzheimer’s Now!™