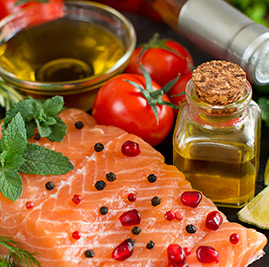 Wouldn’t it be nice if Alzheimer’s disease (AD) could be completely prevented by a single food or dietary supplement? Although A.L.Z. Defense™ comes close to that ideal, the truth is no such magic bullet exists. Unsurprisingly, to give yourself the best chance of reducing your risk for AD, you need to pay attention to everything you put into your body, everyday. That’s right, we are talking about your diet.

For most of us, “diet” is a four-letter word. It calls to mind sacrifice, hunger pangs and, ultimately, failure. However, we are not talking about “dieting” here in the sense of trying to lose weight. Rather, by “diet” we simply mean a specific collection of food or types of food. We mean delicious food, gourmet food, yummy food—food that satisfies your hunger and, if chosen wisely, can also reduce your risk for AD. (Is this making you hungry yet?)

It won’t be any surprise to learn that people who consumed a healthy diet—one rich in vegetables, fruits, nuts, fish and poultry—have a greatly reduced risk for AD when compared to those who consumed less produce and more red meats and fatty animal products [1]. That much is uncontroversial. The question that scientists continue to debate is which diet is the most effective. And layered on top of this is another key question:  which diet are you likely to actually implement in your own life?

A number of specific diets have been studied for their ability to prevent AD, including the Asian diet [2], the Mediterranean diet [3], the DASH diet [4] and the MIND diet [5,6]. After reviewing the evidence for each of these diets, the Scientific Advisory Board of the AD Foundation recommends the MIND diet.

The MIND diet was developed by Martha Clare Morris, ScD, a nutritional epidemiologist, and her colleagues at Rush University Medical Center in Chicago. The name of the MIND diet is short for Mediterranean-DASH Diet Intervention for Neurodegenerative Delay. As the name implies, it is a hybrid of the Mediterranean and DASH (Dietary Approaches to Stop Hypertension) diets.

Not too complicated, is it?

Remarkably, the MIND diet was found to reduce risk of AD by 53% for those who adhered closely to the diet, and by 35% for those who followed it moderately well [5]. These are incredible figures, folks! Very importantly, the MIND diet was also ranked the #1 “easiest diet to follow” by U.S. News & World Report in 2017, and the #3 diet overall among 38 diets recently rated [7].

There simply could not be better news for those of us looking for ways to prevent AD. The MIND diet is simple, effective and easy to implement. Start eating with your mind in mind today!