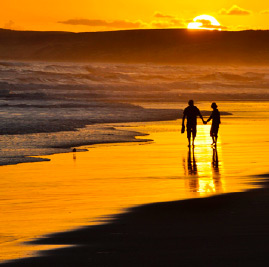 How can (almost) anyone get exercise (almost) anywhere? By the simple act of taking a walk.

As everyone knows, exercise has myriad health benefits, many of which are clearly beneficial for both the body and the mind. For one thing, getting regular exercise helps control weight, which in turn reduces the risk for diabetes. This is key, because emerging evidence suggests that having diabetes also increases your risk for Alzheimer’s disease (AD). Physical exercise also promotes good sleep, which is more important for healthy brain function than most people think. Furthermore, physical exercise also promotes blood flow to tissues, including the brain, which facilitates the delivery of oxygen as well as the removal of deleterious waste products.

In animal models of AD, regular exercise has been shown to directly reduce the accumulation of the neurotoxic protein beta-amyloid, which plays a direct role in the development of the disease [1][2]. In others, memory function has been shown to improve independently of brain beta-amyloid levels [3], including by suppressing the death of neurons, which is a hallmark of the disease [4].

The exact mechanisms are still being worked out, but several studies suggest that physical exercise increases brain-derived nerve growth factor (BDNF), a hormone that promotes the health of neurons and helps stave of neurodegeneration [3,5]. More recent research has shown that exercise increases BDNF in humans, including patients with AD or an early form of memory loss known as mild cognitive impairment [6,7]. Other research has shown that exercise stimulates the production of enzymes—known as proteases—that breakdown beta-amyloid [8]. The president of the AD Foundation, Dr. Leissring, is an expert in this area [9], and has shown that increasing the levels of these enzymes can completely prevent Alzheimer-type pathology in mice [10].

So if you want to take action to Prevent Alzheimer’s NOW!™, one of the simplest and most effective things you can do is to take a hike!