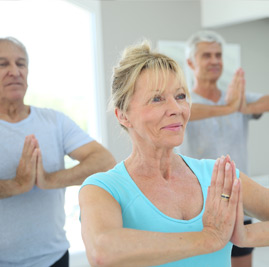 The benefits of yoga are many, varied, and surprisingly relevant to the prevention of Alzheimer’s disease (AD).

Let’s look at just a few of the reasons yoga is a top recommendation for preventing AD.

The term “yoga” has many meanings, ranging from the philosophical to the religious, but what we mean by it here is the system of physical exercise familiar to anyone with a gym membership. Without question, yoga is not merely a form of physical exercise—yoga stands out for its emphasis on the mind-body connection. And it is precisely this distinction that makes it especially relevant to AD prevention.

First of all, the physical benefits of yoga should not be overlooked. Yoga confers many of the same benefits as the other forms of physical fitness we recommend—walking and weight training. These include improved blood flow [1] as well as increases in the expression of antioxidant enzymes [2] that are responsible for eliminating toxic free radicals. In addition, yoga’s emphasis on stretching results in improved flexibility, which in turn can aid the circulation of both blood and lymphatic fluid, while also helping to avoid injuries.

Second, with its emphasis on breathing, yoga is especially good at promoting oxygenation of the brain and other tissues. Deep, controlled breathing is one of the most beneficial of all activities, both physically and mentally, and yet few of us engage in it regularly. Participating in a yoga class is one way to ensure that this becomes a routine practice.

Third, yoga is particularly beneficial for stress reduction. Whereas most other forms of physical exercise are aimed at getting you moving, a principal goal of yoga is the stilling of the mind. Most yoga classes conclude with a period of meditation, which we discuss in greater depth elsewhere. Why is stress reduction important? In a word: cortisol. Sometimes known as the “stress hormone,” cortisol is a hormone released by the adrenal glands as part of the “fight-or-flight” response. Chronic elevations in cortisol are known to damage the hippocampus [3], a key brain structure responsible for the formation of short-term memories—precisely what is affected in AD. Keeping your stress levels low, through yoga or other means, is one way to protect your hippocampus…and the memories it is responsible for making.

Last but not least, the social aspect of participating in a yoga class is something that shouldn’t be discounted. While there is nothing wrong with practicing yoga alone, joining a class can confer additional benefits derived from interacting with fellow yogis, both on the yoga mat and off. Social isolation is a major contributor to risk for AD [4], one that is relatively underappreciated, and participating in group activities such as yoga is a simple way to reduce your risk.

So beyond these theoretical benefits, does yoga actually help prevent AD? Indeed it does. A recently completed clinical trial tested the effects of kundalini yoga in patients with mild cognitive impairment, a precursor to AD. Yoga was found to improve memory and executive function while at the same time diminishing depressive symptoms [5]. A second, larger ongoing study is examining the effects of both yoga and curcumin on AD prevention [6].

It would be difficult to conceive of any other activity that could confer more benefits than yoga. Consider joining a yoga class today. Namaste!